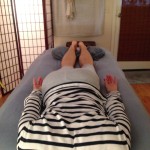 seventy year old client ended up on my table for a Bowen treatment- only because a neighbor touted my work that kept him from having a knee replacement. This client had spent most of her life literally trying to unravel her body which had a serious scoliosis distortion in 3D.  She had worked continuously on her own and with therapists of several modalities- with very limited success.

Enter Bowen Therapy- First treatment nothing unusual.  Second treatment her body started “unwinding”- for an hour and a half.  Third treatment her body “unwound” for three and a half solid hours on my table!  Honestly, I’ve never seen anything like it.  Astonishing really.  What I mean by “unwinding” is literal- her body “contorted” quite unusually with the right shoulder and left hip going up at the same time, hanging out there and then relaxing followed by the same on the opposite side, followed by the ribs undulating, and it went on and on and on.  At the end of the treatment, her spine was COMPLETELY straight and she had a lumbar curve which she says she hasn’t had for many years. She commented that she did a yoga “cat-cow” and thought her belly was going to hit the floor:)

Working with her has been a huge education for me.  I have always known that the body has unlimited capacity to heal itself, but how it goes about that is a truly amazing process.  I simply give it vibrational signals and it does the rest. We are not done yet , it is a process, and an amazing one.  She has grown nearly 3/4″ and her posture has completely changed.

The point is: no matter how long a distortion pattern has been locked in the body, “IT IS POSSIBLE TO UNWIND ITSELF”!! So, for those of you out think “it’s always going to be this way”, don’t give up! Bowen Therapy may be the answer!